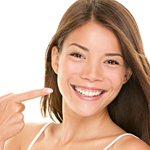 What a lot of patients don’t realize is that if they’ve worn their front teeth down so much, they can do a couple of different things.

Number one, if the front teeth are worn down, the back teeth are more than likely worn down because there’s more force that’s generated the further back that you go as opposed to in the front. There’s no question that a lot of damage has been done on the back teeth as well. If that’s the case, in some cases, the patient’s actually lose what’s called vertical dimension.

For patients who have lost significant vertical dimension, you might notice them because their lips have become flattened or their mouth, when it’s closed, is wider than most people’s, or their cheeks might be a little bit sunken in. Those are signs of a patient who has aggressively worn down the teeth and lost vertical dimension.

If you’ve lost two or three millimeters, sometimes that’s enough to see a physical outward appearance, or change in the lip line or the cheeks or just the whole measurement from beneath the nose to beneath the chin. In that case, you are talking about restoring every single tooth, top and bottom, to build back that dimension that’s been lost.

In another case, or in that same case, another concern of mine, is when the teeth are worn down so aggressively you can start to develop pretty significant sensitivity, because underneath the enamel is dentin. Dentin is much softer than enamel and wears about 50 times faster.

Sometimes I’ve seen patients that have worn so far through their dentin they are actually wearing into the nerve of the tooth. There’s a wide range there, but ultimately, it’s really, really important that you assess the whole picture.