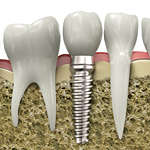 Implants are the way of the future. But they are more and more becoming common place. It’s a service that is provided by more and more dentists every year. Implants are, in most cases, the best way to replace an existing tooth. They’re the closest thing to recreating your natural smile. In cases where patients have a missing tooth, the benefit of placing an implant versus doing a bridge or possibly doing a partial denture, is that you do not have to touch either tooth, in front or in back of that missing space as you would with a bridge.

With a bridge, you have to remove the enamel layer from the teeth, and can also be more of an issue from a hygiene perspective, as it is more difficult to clean underneath a bridge or floss underneath the bridge.

An implant is basically a screw that goes into the bone, and after some months of healing for the patient’s body to have the bone integrate with the implant, a crown is placed on top of the implant. It’s really the best way to mimic the natural tooth.

The benefits that you get from having an implant placed versus a denture without any means of retention, is that a denture on the bottom, where you have all the musculature, the tongue, the cheeks, can frequently become dislodged, move, or shift.

Implants certainly can be used in conjunction with dentures. They’re a great option to aid in retention as they literally lock the denture in place. If you have enough bone to facilitate implants, you can lock the denture into the implants and never have to worry about it while eating, or about the denture coming loose and pinching, shift around, and possibly fracturing or breaking. Implants remove the need for the use of denture adhesive.

Implants Instead of Partial Dentures

Partial dentures can be big and bulky. If you need to replace one tooth it’s not practical to place something big and bulky, which is required to withstand the forces of the bite. There’s a certain design of the framework of the partial denture that’s required. With that comes a lot more material in the mouth, which can be irritating. When you have an implant placed, you don’t have any of that. You really have just a screw and the bone, which you do not see or feel, and the crown.

If you are removing a tooth and immediately placing an implant it’s important to assess the tooth. If it’s a tooth that’s badly infected, it’s important that once the tooth is removed from the socket that the area is irrigated with antibacterial and the infection is mechanically removed from the socket as well. That it’s free and clean from any sort of residual infection because that can easily complicate or decrease the success rate, of the implant once it’s placed.

Once the socket is cleaned thoroughly, bone material is placed back into the empty socket. This increases the likelihood of the bone integrating with the implant and decreases the shrinkage of bone after the area heals.

Once the tooth is removed and the bone is placed, if the doctor needs more of a visual, as far as the positioning of the bone and contour of the bone, then an incision is made in the tissue and the tissue is pulled back. The implant is placed, and a healing cap is placed on top of that implant, then the tissue is moved back into its original position and held down with stitches.

The amount of time required for a patient to heal from this procedure is dictated by the positioning, the health of the patient, the density of the bone, and the quality of the bone. Recovery is usually one to two weeks. Often, patients come back for a follow up visit the week after and report they didn’t have any pain, the area looks like it is healing great, and they had very little discomfort. We ask patients to avoid that area when they’re chewing and eating obviously. But aside from that, there’s typically very little unexpected post-operative pain.

As far as how long does the process take, again, it really is at the discretion of the doctor, and it also depends on the details, so it’s really on a case by case basis on how to determine the length of healing, the time which it’s going to take prior to placing a crown on the implant. Whether or not you extract the tooth and then immediately place the implant. Again, that’s kind of on a case by case basis.

The biggest risk with an implant is non-integration of the implant, if the bone does not integrate with the implant for a number of different reasons. Then the procedure will fail. Ultimately, the implant will have to be removed and then we will assess why it is that the implant failed.

If we can determine the reason why the implant failed and it is something that can be resolved with confidence that the subsequent placement of another implant will have a better likelihood of success, then we move forward with a replacement implant. If we feel as though the patient’s health history or overall condition is not such that would be conducive to a successful implant, we will look at alternative solutions.