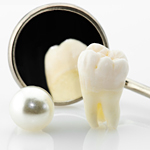 I had one patient, and I have a lot of these patients actually. One in particular that comes to mind that came to me. She was middle-aged and she was newly divorced. She didn’t feel good about her appearance, so she was doing different types of cosmetic work to her face. But her biggest concern was her teeth.

She had previously had dental work done in the front of her mouth. She found that she wasn’t smiling and she was always self-conscious when she was out with friends or even family for that matter. She just never felt like she could laugh or smile or even speak without being concerned about how people would perceive her, what they thought of her.

She came to my office. I spoke with her and got down to the gist of why it is that she felt the way she felt, and what her chief concern was. For her in particular, she was not happy with the shade that the original dentist had done for her. She had some crowns and I think she had one or two veneers. We extended the case a little bit further back. I basically did a lot of cosmetic work. Everything from implant crowns to veneers, to crowns to give her back a smile that she felt confident with.

After the treatment was over, she was super thrilled. She felt like she had never felt before. I mean, really, she never had a concern again as far as smiling or conversing with anyone. She was definitely pleased, and it was kind of, in a way, it was like a life changer for her, as far as how she felt about her appearance.